Center of the National and International reference 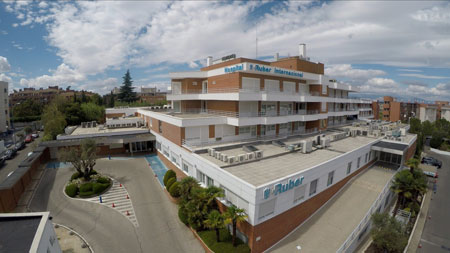 The Hospital Ruber Internacional is a national and international centre of excellence in the hospital world, renowned for its quality, state-of-the-art technology, highly-qualified professionals and its continuous drive for improvement. The constant advances in medical research place it at the forefront of health care. It is a leader in the private healthcare sector for the diagnosis and treatment of conditions which most affect the current population: cardiovascular, cancer and neurological.


RUBER was established in 1942 and the Hospital Ruber Internacional joined the Ruber group in 1984.

Since then, it has been a pioneer in Spain in adopting Information Technologies (IT) for their application in medicine. It installed the first cobalt bomb in Spain, and, in 1974, the first Total-Body scanner. This was the third in the world after London and Marseilles. The Hospital installed the first lithotripter for the treatment of kidney stones. The introduction of fragmentation by shock wave lithotripsy in the field of urolithiasis has been one of the major therapeutic contributions in the history of urology.

The stereotactic radiosurgery system for brain injuries, Gamma Knife, has been used in the Hospital since 1993, and its most modern version, the Gamma Knife ICON, is currently being used. It is the only one in Spain. More than 7,000 treatments have been carried out at the health centre over these 25 years, with some outstanding results.

Advances in robotic surgery have revolutionised patients' quality of life. The Hospital Ruber Internacional continues to focus on the implementation of innovative treatments.

The first CyberKnife system in Spain, which it acquired in 2007, is a sophisticated and powerful linear accelerator that enables the advantages of radiosurgery to be extended to extracranial tumours such as tumours of the pancreas, liver, lung or the prostate, with sub-millimetre precision. Recently, Da Vinci has revamped the robotic system with the acquisition of the state-of-the-art model "xi", incorporating other features and applications in different surgical specialties: urological surgery, gynaecological oncological surgery, thoracic surgery, general surgery and otolaryngology, among other disciplines.

In 2016, it installed the first and only 3 Tesla Magnetic Resonance system, which is the most advanced in neuroradiology, the Magnetom Prisma and, with this acquisition, it joined a select club of health centres all around the world which are very advanced in both care and medical innovation.

This high performance scanner is aimed especially at the most demanding applications and at clinical research, making it possible to tackle the most rigorous challenges in the field of diagnostic imaging, achieving a greater spatial and temporal resolution which consequently obtains an image with an exceptional quality in the shortest period of time possible, in particular when it comes to very advanced applications, detecting small injuries which are not visible in conventional Magnetic Resonance imaging.

In that same year, it acquired a circular scanner, a revolutionary system called "O-arm" for use in operations on the spinal column and in cranial surgical procedures for brain and spinal conditions, allowing the surgeon to see the patient's anatomy in real-time while operating.

All these business initiatives, among others, have been possible thanks to the medical teams — the driving force behind all of them. Thanks to them and their complete dedication, the Ruber International Hospital continues to offer the best care to its patients.

Designed as a "full-service hospital", its 14 Central Departments, 42 Medical-Surgical Units of the different specialities and more than 100 Associate Doctors of renowned prestige, are interrelated amongst themselves and integrated in the Hospital, achieving maximum efficiency in the organisation and carrying out of the different medical, care, teaching and research activities, allowing the hospital to offer an optimum level of health care to those patients who place their trust in us.

It has a workforce of more than 800 employees, including doctors, nurses and clinical assistants, technicians and administrative, maintenance and security staff.


Hospital Ruber Internacional,
the most advanced technology at the service of medicine.

Request the appointment by using our contact form.
To request previous appointment